The book by William Mitchell “E-topia. Urban life, Jim – but not as we know it” was one of the first works containing the concept of Smart Cities. Mitchell, who was the Dean of the M.I.T. School of Architecture and Planning from 1992 until his death in 2010, analyzes the changes that sensors, software, mobile devices, computing and telecommunications bring to our daily life, social behavior and economics. 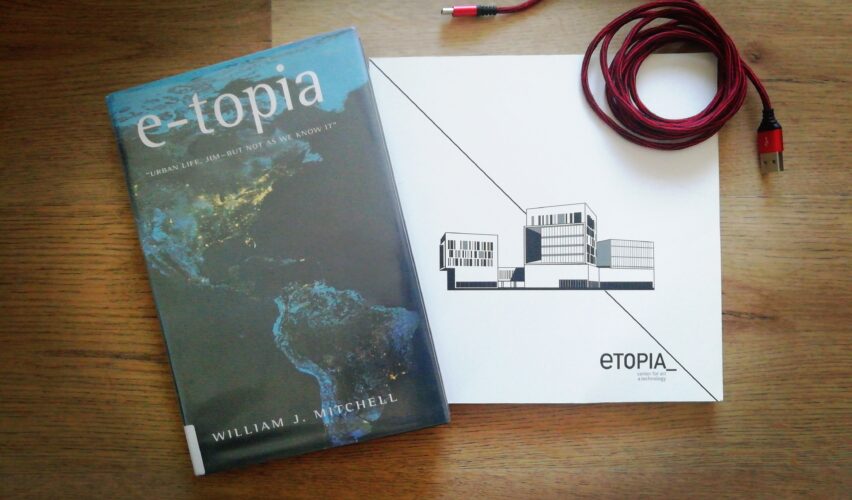 The book by William Mitchell “E-topia. Urban life, Jim – but not as we know it”, published in 1999, was one of the first works containing the concept of Smart Cities. It is a very special work for many reasons. Mitchell was part of the scientific committee that so wisely advised the city of Zaragoza on its initial steps of its journey towards the knowledge society. In its memory, we named the city’s flagship innovation hub after his work. “Etopia. Center for Arts and Technology”, conceived by a M.I.T. team led by Mitchell, is now up and running.

That opening sentence (“urban life, but not as we know it”) summarizes the spirit and message of the book. We will increasingly continue to live in cities, since cities are the most successful generators of opportunities for people, but our life, although powered by the same human and social principles deeply rooted in our genetics, will be slightly different.

“E-topia…” updates the microscopic description about how cities work that Jane Jacobs painted in her renowned book “Death and life of great American cities”, adding what Jacobs could not have guessed in 1959: the irruption of Internet and telematics. William Mitchell’s “E-topia…” colours the overall picture of cities by understanding the effects of technology over our neighborhoods, our houses, our workplaces. Over us.

Mitchell, who was the Dean of the M.I.T. School of Architecture and Planning from 1992 until his death in 2010, analyzes the changes that sensors, software, mobile devices, computing and telecommunications bring to our daily life, social behavior and economics. Transformations that we are already seeing in cities all over the world. As an example, Mitchell’s vision predicts as early as 1999 the explosion of today’s widespread phenomena such as co-working, Internet of Things (IoT), telepresence and RFID cards.

William Mitchell’s “E-topia…” is, above all, a book about people and places: “the 21st century will still need agoras – maybe more than ever. But these will not always be physical places […] If these places are to serve its purpose effectively they must allow freedom of access and freedom of expression”. Thus, openness and freedom not merely as a principle, but as a design guideline for efficiency.

Mitchell envisions new “e-topias: lean, green cities that work smarter, not harder.” They are based of five principles: dematerialization (electronic goods and services), demobilization through virtual selves and connections, mass customization or the ability to tailor services and goods to every unique user, intelligent operation (the traditional, narrow “smart city” approach) and soft transformation, meaning that for the first time in recent history, the physical changes produced in old cities by this new economy are regenerative instead of destructive.

In which is probably one of the most powerful messages of the book, Mitchell states that, by following those principles we can, for the first time in history “aspire to meet our own needs without compromising the ability of future generations to meet theirs”. Sustainable development is, therefore, not beyond reach.

Not surprisingly then, different people are trying to apply those principles to a whole range of disciplines from product or service design, architecture, business strategy, policy making and urban design. Green cities are a common subject nowadays and greenness has become part of the core strategy of every major city. Lean cities and leanness might very well be in the future.

And what about places? The power of places, Mitchell says, will still prevail. Physical settles and virtual venues will function interdependently and will mostly complement each other, as the virtual debate in twitter during a congress or meeting enriches the physical experience of the event. Sometimes “we will use networks to avoid going to places but most of the times we will go to places to network” or, yet more often, we will use networks to share what we experienced by going to places. 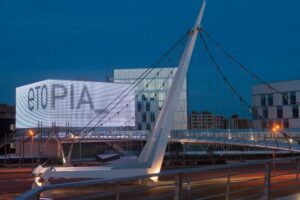 William Mitchell was, until his death, president of the Committee of Experts that designed the innovation district of the “Digital Mile” in Zaragoza, Spain. The concept of openness that Mitchell advocated for the new agoras watered the “Digital Mile” thanks to his work. In his memory and because of his inspiration, we named the flagship innovation hub of the city of Zaragoza after his work: “Etopia. Center for art and technology”, opened in 2013, three years after Mitchell’s passing. A small contribution to the memory of the man that shaped our way to think about cities.

7 years after its opening, “Etopia. Center for Arts and Technology” contains an agora (the William J. Mitchell Auditorium), a start-up incubator, a 600 sqm digital façade, wide spaces for exhibitions intersecting arts and technology, an urban lab to co-create smart city prototypes, science and visual labs, a residence comprising 36 rooms and a DIY maker space. It is one of my major accomplishments in my professional career to be part of the core team that launched it and fuels it with content. 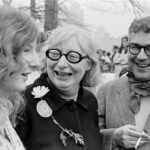 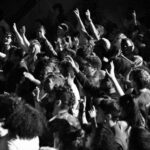 Next Story
The 5G Digital Divide